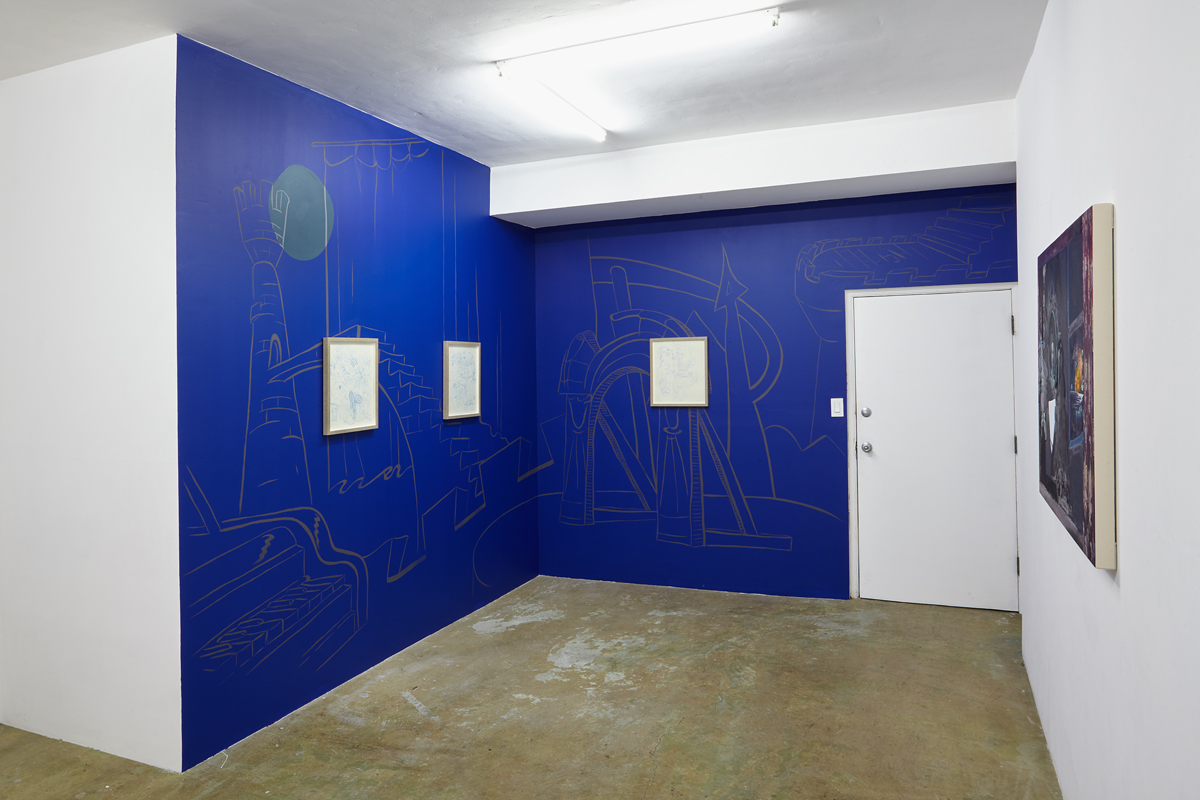 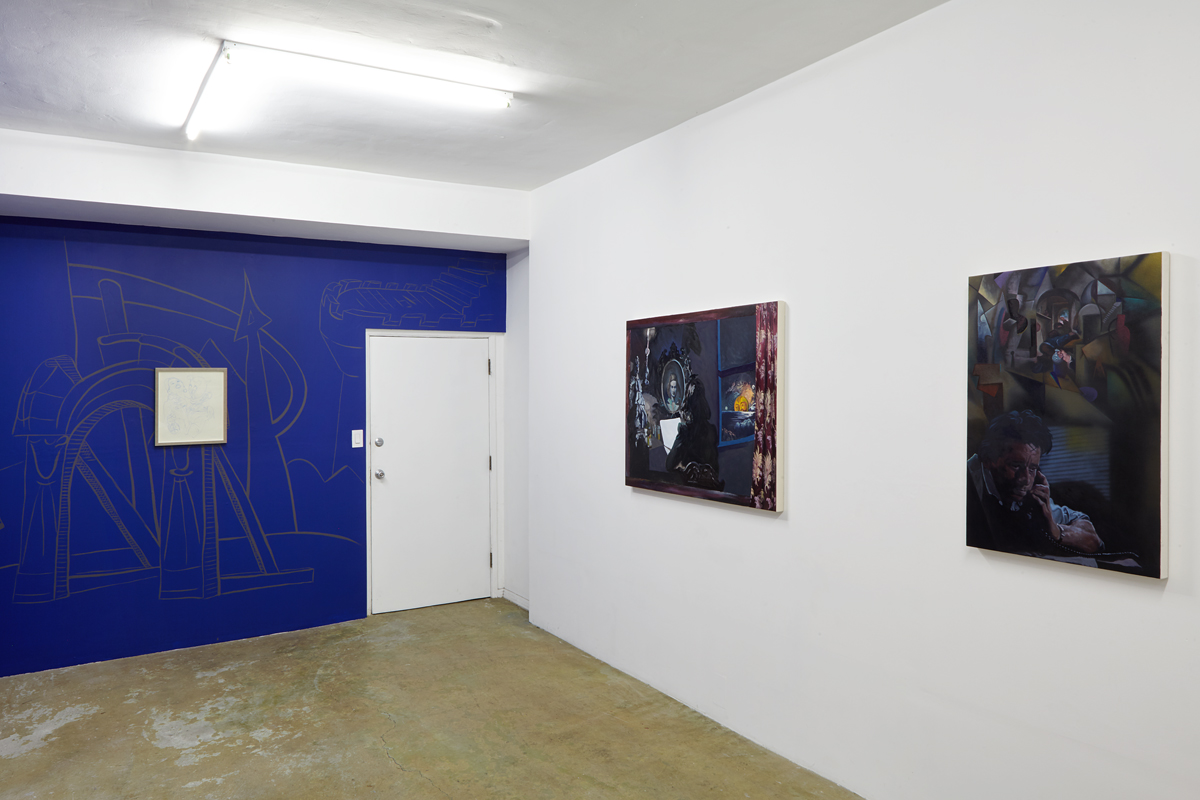 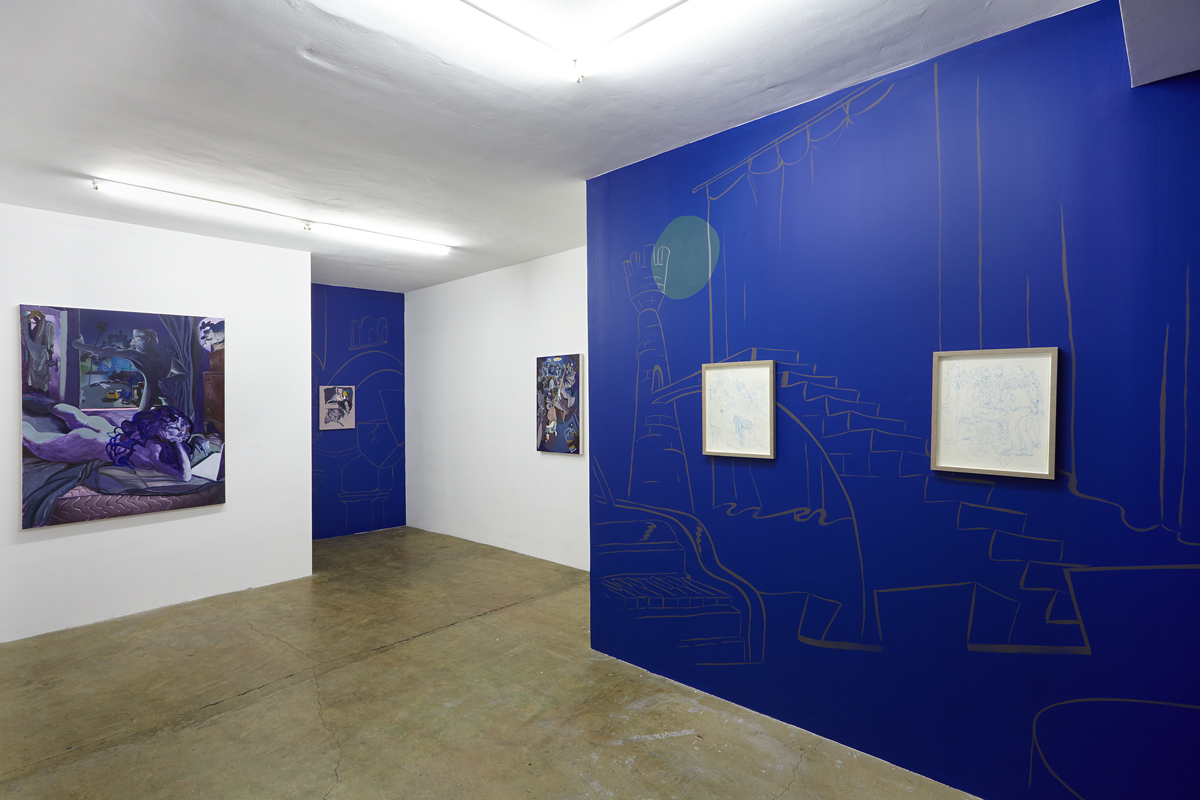 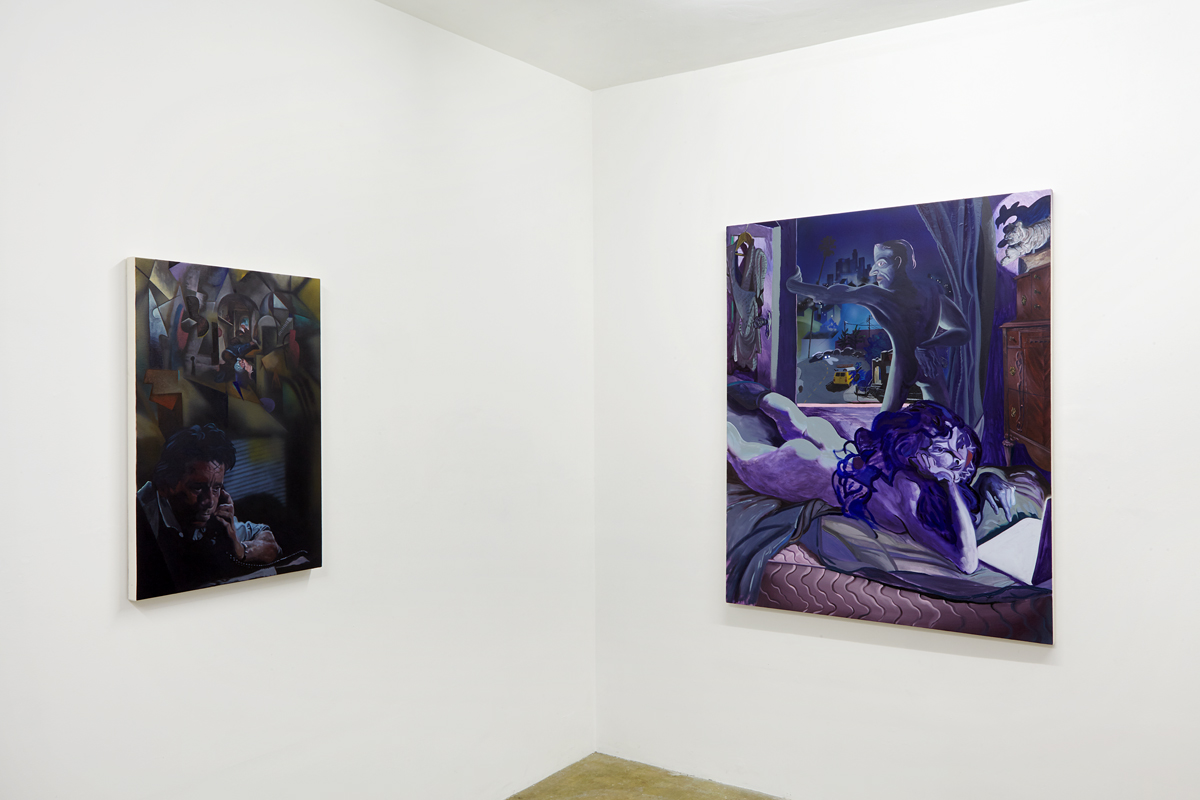 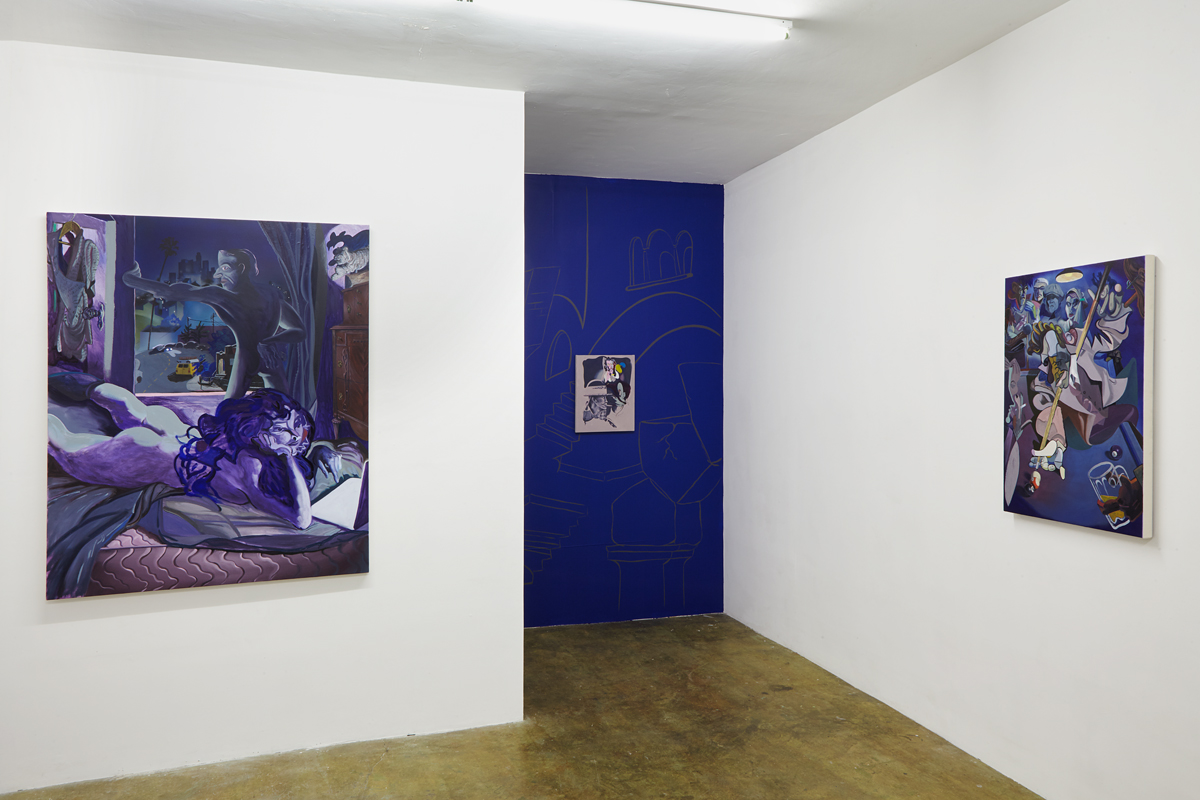 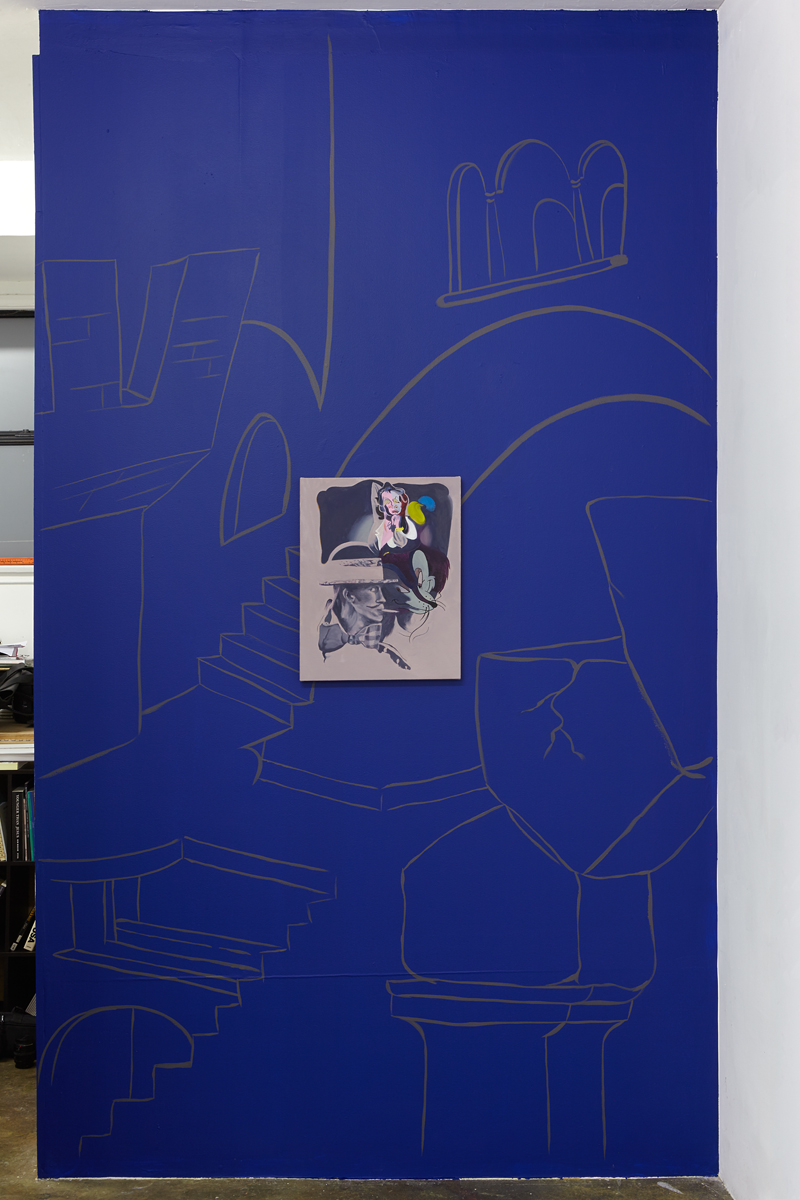 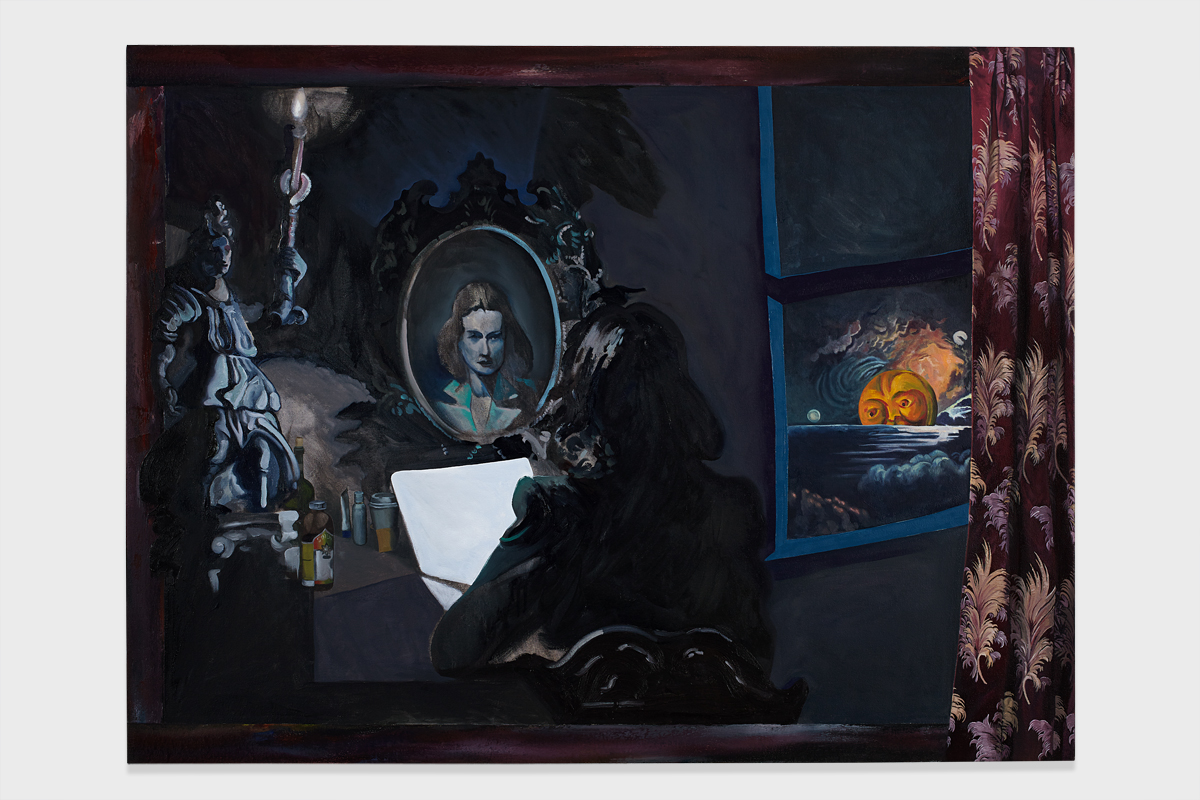 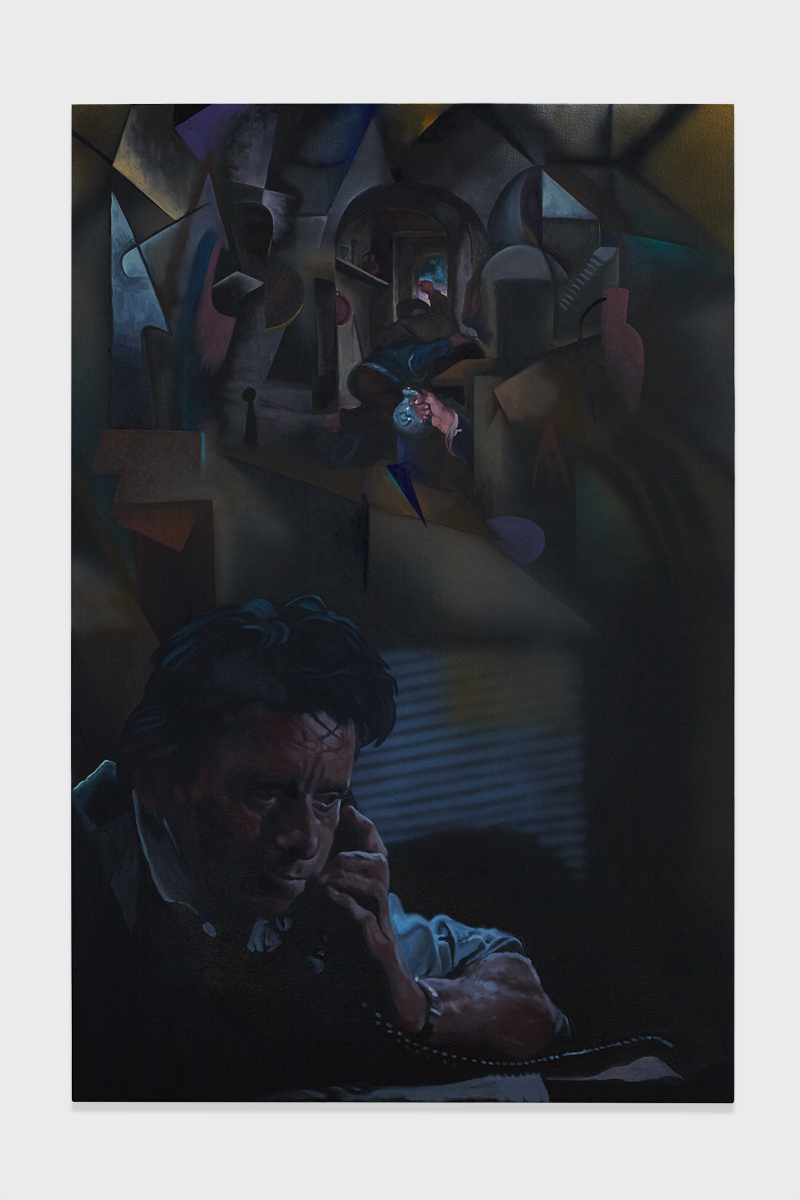 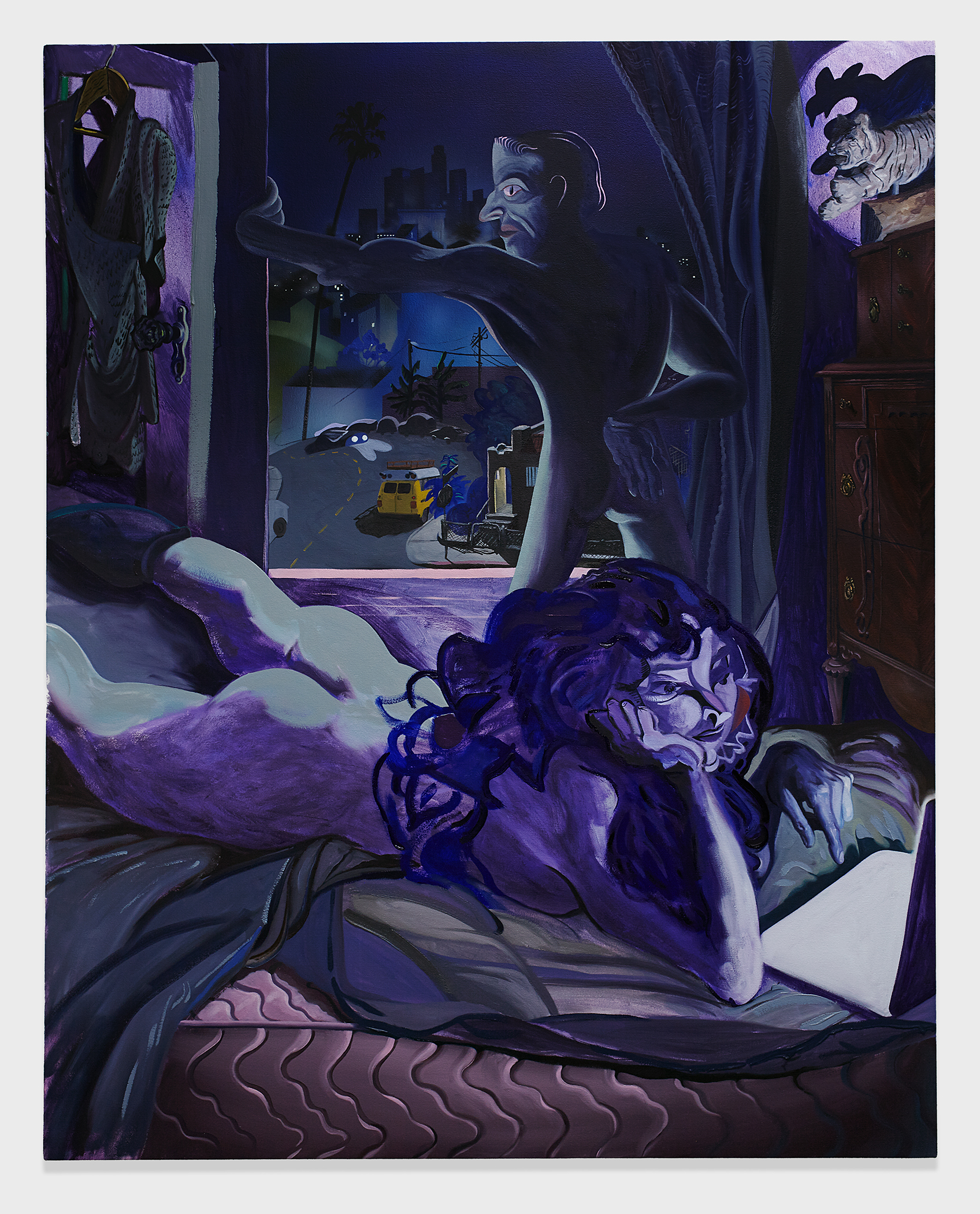 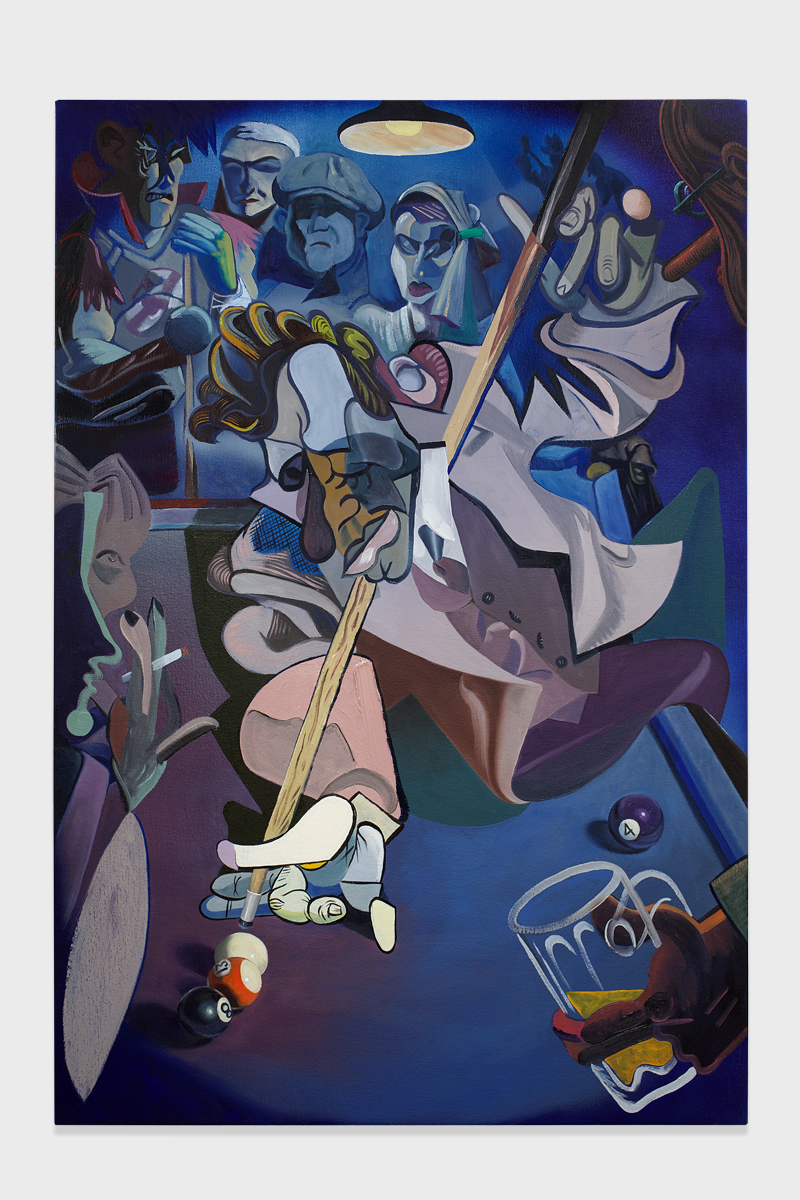 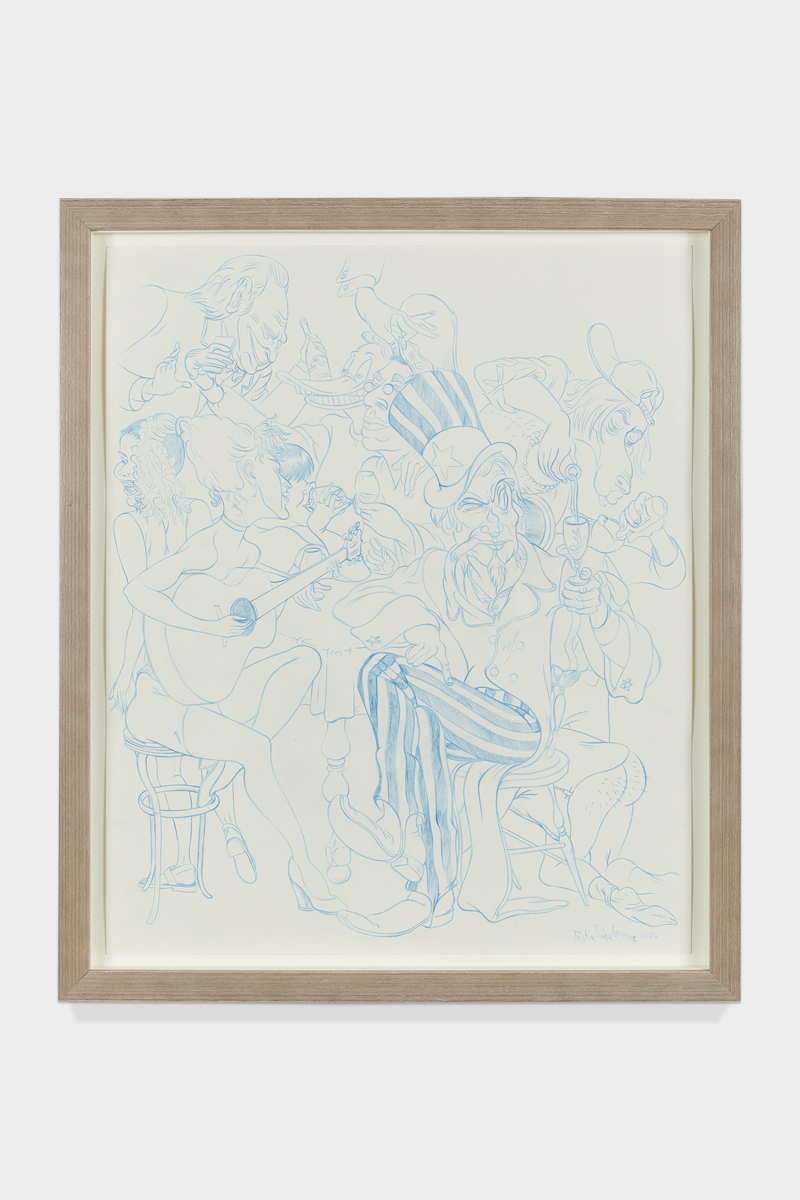 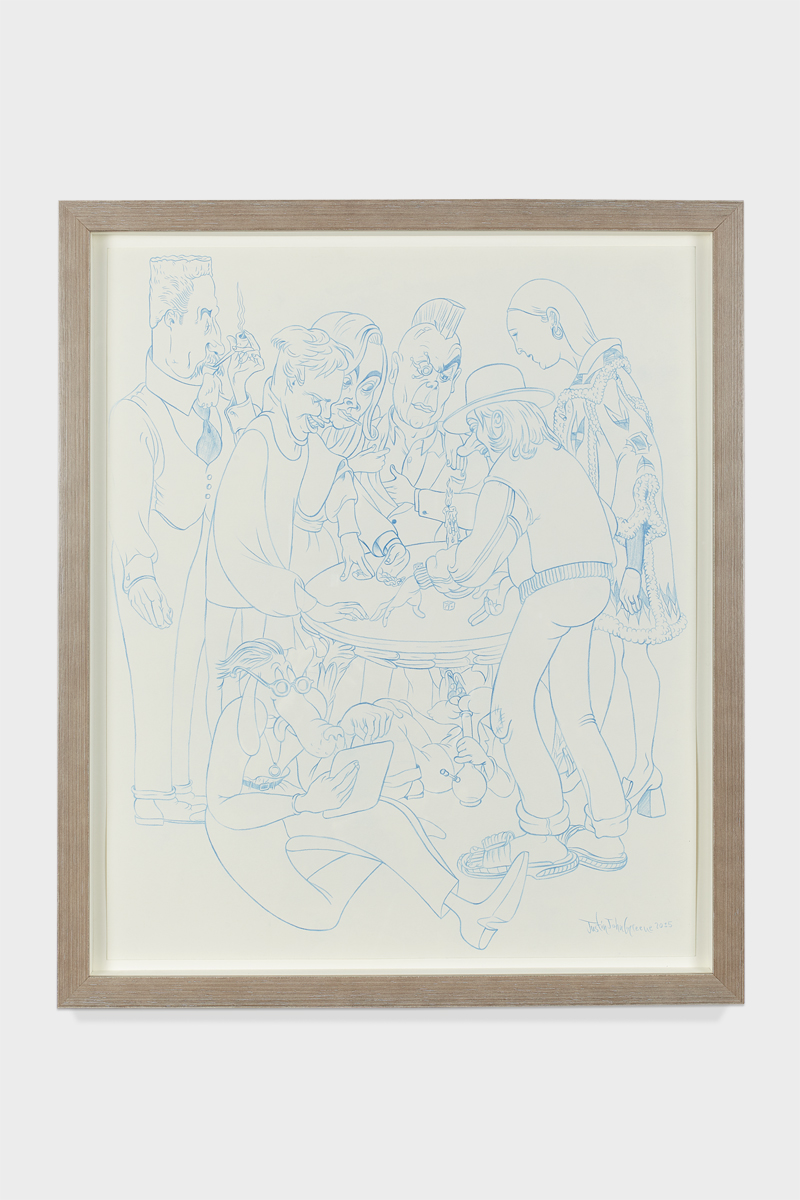 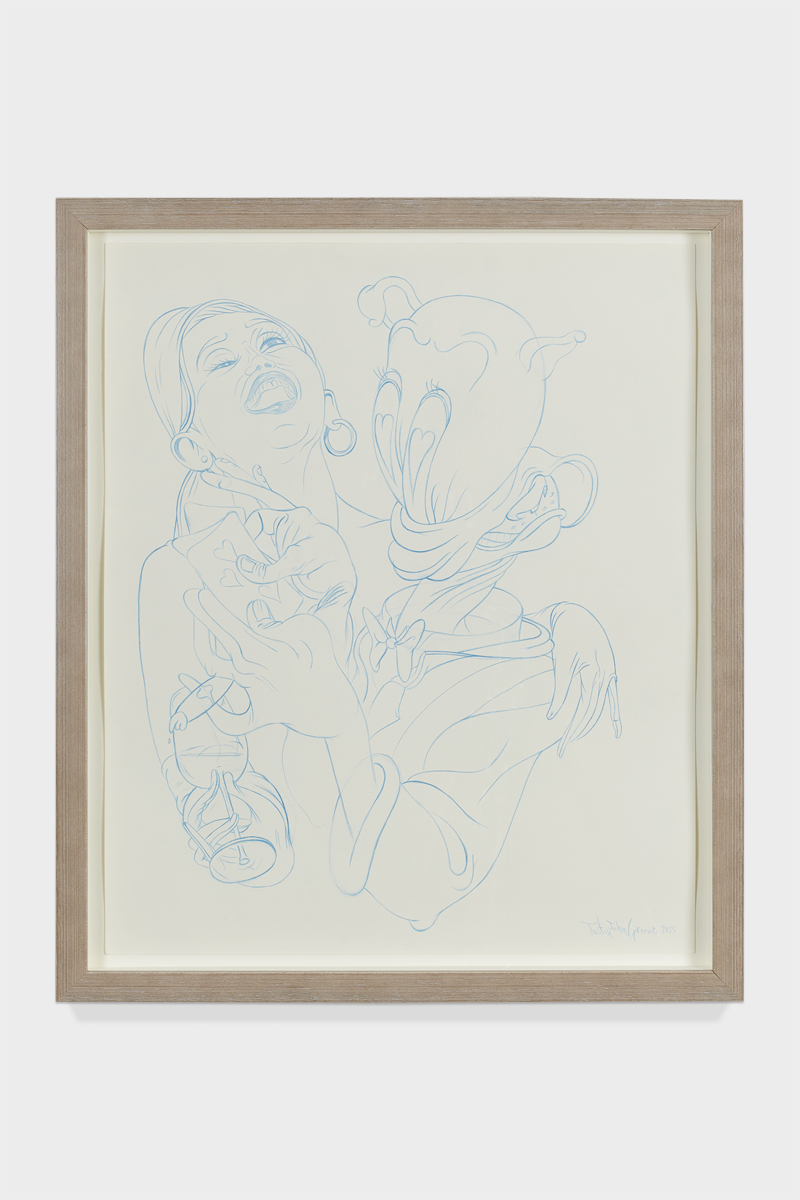 Moonlighting refers to work taken on in addition to one’s regular employment. The scenes in Greene’s paintings depict a world preoccupied with constant, never-ending labor – often of a mysteriously sultry nature.

This series strings together visual representations of schemers and hustlers from various eras and media, referencing Baroque tavern paintings, pulp magazines, German Expressionism, early cartoons, film noir and the Harlem Renaissance. The paintings form anachronistic tableaux to underscore a perpetual labor. By nodding to and pulling from these references, Greene conveys a common statement: life is hard and people are often pushed into strange situations simply to get by.

The scenes presented —a desperate man on the phone, a gathering of cartoonish gamblers, the tired face of a woman working late— are all meant to evoke the unintended side effects of networking and freelancing, which may include sexual arousal, adrenaline rushes, nepotism, drunk texting and hangovers. Each character is caught up in a constant state of becoming, which is both exhilarating and oppressive at times.

Greene says: “I hope these paintings invite a way of openly discussing the stressful and deeply uncertain aspects of living under capitalism, especially poignant in this era of the ‘sharing economy,’ when employers utilize hordes of unpaid interns. Secondly, I hope to re-examine how the role of the artist in society has long been seen as exceptional or unconventional. Today, it seems that artists are more and more just like other types of workers, in an economy that increasingly values ideas and creativity. One could read the various dramas in my work as adding up to a sort of satirical allegory for an artist’s life, albeit one that embraces kitschy clichés of urban bohemianism.”